(I am embarrassed to say that this blog post was supposed to have been posted 2 months ago. Time just got away from me but still wanted to share and reflect on a great activity.)

In the spring of 2016, I attended a conference at Medfield Public School District where I experience Breakout EDU for the first time. After a short 45 minutes, I was HOOKED as I had a blast participating and could not wait to help bring it to BHS. If you have never participate in a breakout before or you want to learn more about the concept, watch this short video from the company itself.

In talking about what team bonding experience teachers should partake in this year on the first workshop day of the school year, it was determined that we should give #BreakoutEDU a try. So in a collaborative team effort, Zanna Blaney, Dean of Students, Jessica Gilcreast, librarian, Bill Hagen, Principal, and I, as well as other Bulldog team leaders (known as the Decade Dogs), we were able to pull off seven simultaneous Breakouts for the whole professional staff to participate in.

Three of us met over the summer to determine what task we wanted the staff to participate in. We decided to use one that was already made, even though we thought it might be fun to incorporate our high school’s history into the activity since we were going to celebrate our school being open for 10 years. The game that we used was called Time Warp. We did this for a couple of reasons…it was geared for adults, the theme was generic enough that all parties would be able to participate in the breakout, and the size of the group was large enough (we needed to split up around 120 people into 7 groups). 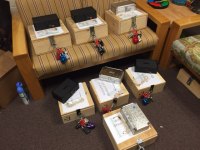 Jess Gilcreast had to determine what items needed to be purchased in order to run 7 different breakouts at once. Jess quickly discovered that the items were easy to find in Amazon due to many other people thinking the same thing…just buy it on Amazon. Jess had purchased two breakout boxes at the end of last school year and we were able to coordinate with another school in the district to borrow some of their supplies from their breakout boxes. We were also fortunate enough that our principal had some left over wood at his house and was willing to create 5 additional boxes for us.

Once all of the supplies arrived and the necessary papers were printed, we then put the boxes together. Must say, this took a bit of time, especially since it was our very first time doing this. We also double checked things worked since there were going to be seven different groups running at the same time. What is extremely helpful though is that for every game, there are written instructions as well as a video that help walk you through how the game is run, with the combinations to the locks. Very helpful!

On the day of the breakout, we set up the seven rooms that were being used for the games and explained how the game was going to run to our other team leaders. A demonstration of where the clues were and why they worked/were connected with each other was explained.

Then the entire professional staff met in the theater. Since they had no clue what they were doing (or even knew what was up our sleeves), we showed the following video. We wanted to make it fun.

We then followed up with some more directions and broke staff up into the seven groups (thanks Zanna). The groups went to their designated spots and the game started. Once the staff broke into their box, they found some celebratory items to wear (celebrating the school turning 10). We all then meet back in the theater to talk about the activity as a whole group.

Below are some pictures from a couple of groups while they were trying to breakout. 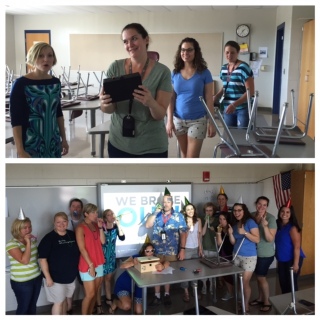 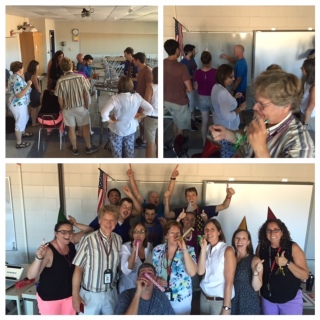 In closing, it was well worth the money purchasing BreakoutEDU. As a team leader running one of the breakout games, it was really cool to see staff that I work with in a different light. True collaboration was happening in front of me.

Now, when staff want to use the game in their classes, they just let Jess know and she signs out the items to the teacher. It is also important to note that there is also a digital version of BreakoutEDU. It can be found here. Highly recommend all educators have an opportunity to participate in at least one Breakout. So, when are you going to collaborate with your staff or let your students breakout in class?